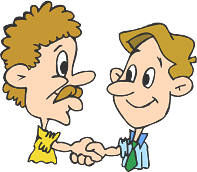 Why Fight If You Don't Have To?

I've used it many times, and it works!

Many court battles are resolved without a fight.

Reduce risk. Save time. Save money.