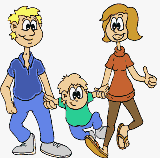 Who Should Have Your Children ?

Is someone threatening your rights?

Who is trying to take your children?

What argument are they making?

Are you ready to fight ?

Here's some legal ammunition you can use !